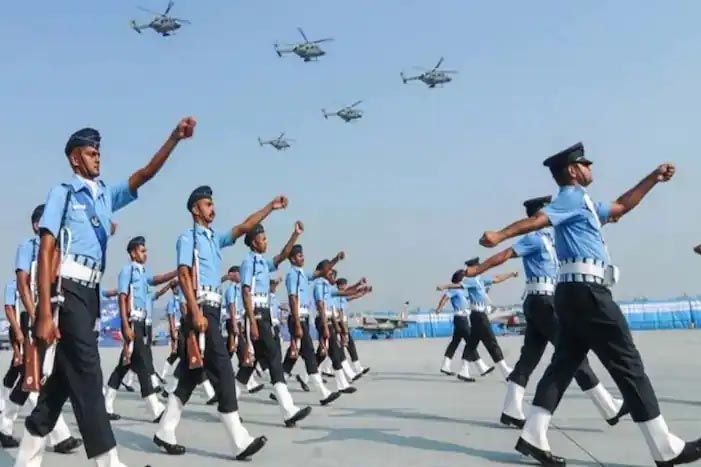 NEW DELHI: The Indian Air Force (IAF) on Sunday released details on the recruitment plan under the Centre's new Agnipath Scheme including eligibility criteria, age limit, educational qualifications, period of service, career options for Agniveers after completion of service, training, and others.

Defence Minister Rajnath Singh on June 14 unveiled a recruitment scheme for Indian youth to serve in the Army, the Navy and the Air Force called Agnipath and the youth selected under this scheme will be known as Agniveers.

Agniveers once enrolled into the Indian Air Force, will be governed under the Air Force Act 1950, for a period of four years. Endeavour will be made to enrol candidates as Agniveers from all parts of the nation, utilising contemporary technology, specialised rallies and campus interviews at recognised technical institutes such as Industrial Training Institutes, NSQF etc, said the statement issued by the IAF.

It further stated that Agniveers would form a distinct rank in the IAF, different from any other existing rank. For personnel below the age of 18 years, the enrolment form will need to be signed by the parents or guardians, in accordance with extant provisions.

As per the statement, "After four years, all Agniveers will go back to the society. However, based on organisational requirements and policies promulgated by the IAF, Agniveers who have exited will be offered an opportunity to apply for enrolment in the IAF in the regular cadre, according to Air Force."

It further informed that these applications will be considered by a centralised board in a transparent manner and not more than 25 per cent of the strength of the specific batch of original Agniveers will be enrolled in the IAF based on performance during their four-year engagement period as Agniveers.

Under this scheme, the eligible age will be in a range from 17.5 years to 21 years. Other educational qualifications and physical standards would be issued by the Indian Air Force.

Agniveers will have to meet the medical eligibility conditions laid down for enrolment in the IAF as applicable to respective categories or trades. No permanent low medical category Agniveer will be eligible for continuation of his engagement after being placed on medical category.

On being enrolled, individuals will be imparted military training based on organisational requirements. IAF will endeavour to maintain a centralised high-quality online database of 'Agniveers' and will follow a transparent common assessment methodology.

An objective assessment system to ensure fair and impartial assessment will be introduced. Skills attained by Agniveers will be systematically recorded.

Broad guidelines will be framed before the appointment of the first batch of Agniveers and the same along with any subsequent changes would be circulated.

The candidates enrolled under this scheme will be paid an Agniveer package of Rs 30,000 per month with a fixed yearly increment. In addition, risk and hardship, dress and travel allowances will be paid.

A non-lapsable dedicated 'Agniveer Corpus Fund' will be created in the interest-bearing section of the Public Account head. The fund will be administered and maintained under the aegis of the Ministry of Defence. Each Agniveer is to contribute 30 per cent of his monthly income to the 'Agniveer Corpus Fund'. The Government will provide an interest rate equivalent to the Public Provident Fund on the amount accumulated in the fund.

In case of death, insurance cover and compensation will be admissible to Next of Kin (NOK) from the Agniveer Corpus Fund.

On completion of the engagement period of four years, Agniveers will be eligible to receive the 'Seva Nidhi' package, which shall comprise their contribution (into the Agniveer Corpus Fund) and a matching contribution from the Government and interest on the accumulated amount.

In the case of individuals who are subsequently selected for enrolment into the IAF as regular cadre, the 'Seva Nidhi' package to be paid to them will comprise only of their contribution including accrued interest thereon. The 'Seva Nidhi' will be exempt from income tax.