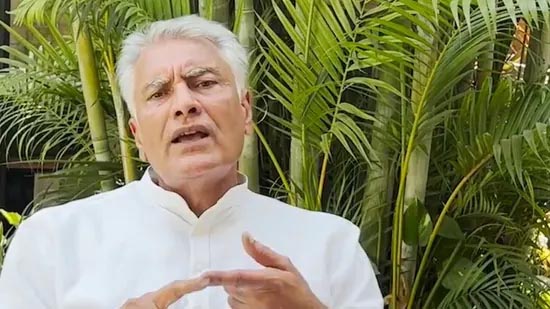 New Delhi: Senior Congress leader Sunil Jakhar on Saturday (May 14, 2022) quit the party, days after he had received a show-cause notice for alleged anti-party activities. In an almost 35-minute-long Facebook live, the former Punjab Congress chief shared his "dil ki baat" and announced that he is quitting the party.

The 68-year-old also pointed out various issues that Congress is going through.

Taking potshots at the Congress, Jakhar questioned if Sonia Gandhi wasn`t aware that he held no position in the party, and yet he was issued a show-cause notice.

"Tariq Anwar served me a show-cause notice. He`s a person who had left Congress by making several allegations against the party and Sonia Gandhi," he said.

Jakhar lashed out at Ambika Soni and asked how can she be a part of the committee against him when she is the one who made the allegations of indiscipline against him.

"Where was Ambika Soni in 1970, when Congress needed its members the most? She ran away from her responsibilities," he said.

Jakhar, notably, was among the front runners for the chief ministerial post after Amarinder Singh was unseated last year. The chances of Jakhar becoming the chief minister were scuttled after the statement of party leader Ambika Soni, who had said that the party should go with a Sikh face. seniority in the party.

Jakhar, who is considered close to former Congress chief Rahul Gandhi, had repeatedly criticised former Punjab chief minister Charanjit Singh Channi and had termed him a liability for the party after the Congress lost to the Aam Aadmi Party in the recently-concluded state assembly elections.

He was critical of the party leadership in the run-up to the assembly polls in Punjab.

The setback for the grand old party came amid its second day of the ongoing 3-day Chintan Shivir in Udaipur.

Earlier on the first day of the Shivir on Friday, party interim president Sonia Gandhi had addressed the leaders who were invited to the event.

On the agenda of the party are discussions on `communal polarization`, farmers` issues, and strengthening the party for the upcoming elections.